The BMW E23 7 series was a continuation of BMW’s drive to standardize their model designations and continue their drive to be a true competitor to Mercedes-Benz in the luxury car arena into the 1980s. Introduced in 1977, the 733i produced 181 horsepower by 1983, being superseded by the 735i in 1985. These cars were ahead of their time, offering such features as service interval indicators, on board computers and eventually anti lock brakes and a driver’s airbag. You still see an occasional first generation 7 series on the street, but typically, they are well worn, as collectors prefer to collect its two door brother, the E24 6 series. This example of one of BMW’s early executive sedans comes from our reader John in New Jersey. 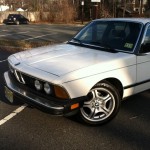 This car has been my daily driver, but I will soon be going away and can’t stand the idea of leaving it sitting for long periods of time. That is terrible for all cars, especially vintage BMW’s. I’m the third owner and so far I’ve had this car for about a year and it has been reliable, and a blast to drive. The transmission shifts smooth, the breaks are good, the ac blows cold, and all the electronics work. If you’re looking chances are you already know a lot about this car, and that they can last for hundreds of thousands of miles if they’re maintained well. This one has been, and I have several folders filled with records to prove it. The car was purchased at Open Road BMW in Edison, NJ in 1984 and the same female owner drove it until 2008. She then sold it to a mechanic whom I brought it from in March of 2011. Since having it I have put about 5,500 miles on it and some of those trips have been about 400 miles with no problem. The car is reliable and I would not hesitate to take it across the country.

This car is not a grey market import; it was made for the United States. This makes it even more rare, as very few US-Spec manual transmissions were made. The advantage of a US Spec is apparent when you try and insure the vehicle, and when you try and get it inspected.

– Five Speed Manuel Transmission (Very Rare for E23)
– 4 New German Made Goodyear Eagle RS-A’s 225/55/17 ($220 each)
– 17-Inch M Wheels
– No Mechanical Issues
– No Leaks
– No Burning of Oil
– Spare Stock Wheel and Spare M Wheel
– Stock Wheels Also Available With Firestone Tires On Them With Decent Tred Remaining
– AC Blows Cold
– Non-Smoking Owners
– No Electrical Problems
– Only Use Mobile 1 Synthetic Oil
– I get 17 MPG in Town and 26 On The Highway
– Passed NJ Inspection In November
– Has original tool kit and is only missing small pliers.

Things To Keep In Mind

– Shocks/Struts are starting to wear and could be replaced if you intend to drive this car very spiritdly, it does not sag or bounce but it is fairly soft

– Stain on headliner in the back right that is due to the sunroof being left open about half a centimeter while it was raining, the car does not leak.

– There are a few rust spots on the lower right side of the car. They are barely noticeable and minimal considering the cars age but I included a few close up shots of them. The rest of the car is rust free!

The car is reliable, and the fact that it is a manual with a near perfect interior, and exterior in such good condition makes it extremely rare. As it ages it will only more rare.

The seller has provided quite a comprehensive history of this 733i, and these manual transmission E23s are certainly a rare find. With one owner for a long time, the original paint and a comprehensive history, this would be a fantastic usable classic of a BMW that hasn’t garnered the most popularity amongst enthusiasts but is an important BMW in its own right.

On July 27, 2001, the last E38 BMW 7 series rolled off the production line. Picking up the baton was a car that polarized the BMW faithful. The E65 7 series. People rushed to buy the last of the E38s before none could be had. These were magnificent vehicles, and towards the end, the M Sport package added a few tweaks that worked amazingly well on such a large sedan. This lower mileage E38 is a nice example of the last of the breed. With only 60k miles, this is a decent price for a lot of car maintained to a respectable standard. I always enjoy perusing the BMW Car Club of America’s Classifieds because more often than not, the best examples of the breed come up for sale in such a venue. This E38 is no exception.

Clean, low mileage E32 7 series aren’t very common these days. Those with a manual transmission are even less common, no matter the condition. Here’s a clean 735i 5 speed with just over 37,000 miles out on Long Island. This beautiful, never abused, and always maintained driving machine has had two local (Hamptons) owners since new. It’s been diligently serviced right here at Joe’s Garage for many years and is no exception to our 27 year commitment to quality of offering ready to safely drive and own vehicles.

All original paint, with one small ding on left side door(no paint abrasion- see photos), all mechanics and accesories properly working, and ready to drive anywhere. Tires have most of ther original and evenly worn tread, but prudence would suggest replacement, purely because of their age(we can easily do that if you call us to arrange).

NADA is listing high retail at $5,000 for a 1988 735i. There’s a few bids and a couple days left in the auction, so I’d wager to say this number will be met and most likely exceeded, as examples like these are rare. This car also has a good, neutral color for resale, the manual transmission makes it attractive to enthusiasts and there is the advantage of this car not having the complex V12 and expensive repair bills.