As I mentioned in the M635CSi post recently, some of the confusion about these “M” branded models came from the nomenclature between the E24 and E28. While the M6 and M5 co-existed in the United States market, they did not in Europe. This left the M635CSi to be the equivalent of the M6. But the same was not true of the M535i. This model was sold as a more affordable alternative to the M5; most of the look of the Motorsports model but without the bigger bills associated with the more exotic double overhead cam 24 valve M88/3. Instead, you got a 3.4 liter M30 under the hood just like the rest of the .35 models. The recipe was a success, selling around 10,000 examples in several different markets – but never in the U.S..

Instead, the U.S. market received the 535iS model. The iS model was specific to the North American market and gave you the look of the U.S.-bound M5, with deeper front and rear spoilers, M-crafted sport suspension and sport seats. It, too, was quite popular – between 1987 and 1988, just over 6,000 examples sold in the United States alone, and of those, a little more than half were the preferred manual variant. One of the nice aspects of the 535iS was that if you enjoyed colors other than black you were able to order the lesser model in any shade you wanted, unlike the M5.

Today’s 535iS is a bit special, as it’s combined the two models into one in an exhaustive recreation of a European market M535i starting with a Zinnoberrot 535iS: 96%Original paint no accidents clean title – car was doored and repaired with receipts to show. It was blended on the passenger rear door.

Full OEM European Conversion down to the stickers through out the car that were European specific.

BMW Evo Cloth interior with black leather bolstering throughout including a the center front armrest.

Also included will be a set of 16×8 Euroweaves with new tires.

Documents dating back to 1997.

Won first in class at the Euro Auto Festival 2017.

Needs nothing but a new caretaker. 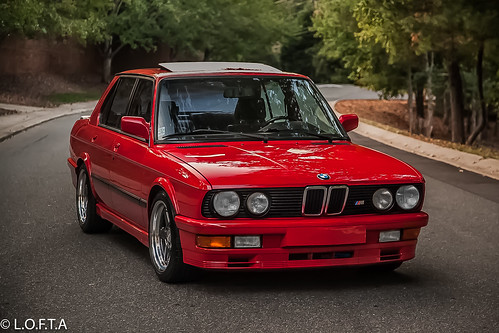 Originally, this car was sold as a manual Zinnoberrot (138) with black leather (0203). Produced in mid-1987, it featured the limited slip diff (209), sport suspension (226), electric sport seats (458,481), on board computer (551) and M-Tech rear spoiler (716). The bones of that production still remain, but the seller has gone above and beyond to create a European-guise E28 M535i. The only thing missing? Well, I know it’s silly but I really loved the original turbine TRX-equipped M-wheels that were specific to the model. But in all honest I totally get why they wouldn’t be here, and the Schnitzer wheels are a pretty good replacement. If you don’t like them, though, the seller also has a set of BBSs that would give a more OEM-look. The European cloth interior is very cool, but the big draw is the swap to Euro-bits all around. It’s an expensive conversion if done properly, and this one appears to be just that. The exhaust appears to be a B&B replacement, too. Otherwise, the only questions are the mechanical status and electrics status – neither are disclosed, but given the condition overall I’ll go out on a limb and suggest they’re probably not an issue.

The bids have reacted to the impressive nature of the car and presentation. The reserve is still on but bids are strong at $9,600 so far. It wouldn’t surprise me if the seller is hoping for double that amount given the cost of the modifications alone. That used to be M5 money, but the market has moved on. Even though this doesn’t have the ///Motiviation some would hope for with the look, it’s still a beautiful example of a classic design presented in a way that will really stand apart from the crowd in a package that’s much easier to buy done than to recreate yourself.