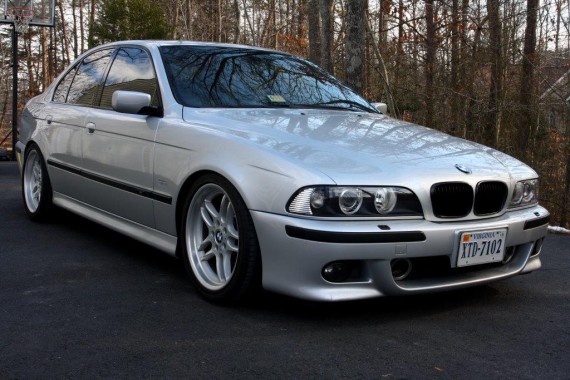 Lets get this out of the way right off the bat. The E39 BMW 5 series is the best looking sedan ever made. It is the pinnacle of balanced design and it’s beauty is only accentuated by the garish abomination that succeeded it. Show me someone who says they love their “Bangle Butt” 5 series and I’ll show you a person in serious denial. BMW tired to scale back the ugly on the F10 but it’s still a bloated boat compared to the clean, svelte E39.

Growing up I was obsessed with the hottest version of this beautifully thought out machine, the E39 M5. One of my favorite pro skateboarders had two of them and could be seen thoroughly enjoying them in his video parts. At age 15 a blacked out M5 with “peanut butter” interior was THE car and it remains a vehicle that I am still in lust with. However I’m a bit more educated than I was back then and I know that while the M5 is the lead, there is an equally impressive supporting player in the cast, the 540i M-Sport. When it comes to fan favorites, few cars tick the right boxes like the original M5. It has a mystique about it that really sets it apart from even its M siblings, as if it were somehow made from a different mold than the M3 and M6. Coupling a great shape, excellent driving characteristics and one of the most dynamic inline-6s ever made, the M5 was the stuff of legend right from launch. That’s why it’s particularly puzzling that it has not gained the star power of the M3 or M6; true, the M3 had a much more substantial racing history – but it’s quite hard to say that it would put a bigger smile on your face than the M5 would. Every one-ramp and exit ramp becomes an opportunity to get that rear end to step out just a bit; it’s so easy to catch, it almost feels like it was designed to drive at a 10% slip angle. I remember the first time I climbed behind the wheel of my father’s M5 – I felt like I was on top of the world. There was a ferocity to the way the needle climbed the tachometer coupled with a raw scream from the S38 that few cars I’ve driven since have been able to match – it was worthy of instant goosebumps. I’ve driven faster cars – much faster cars – but the M5 feels special in ways they just don’t: The E30s are indeed being snapped up, but that doesn’t mean there aren’t some still hiding out there to be picked up by enthusiasts. Today’s is a pretty blue example with the M-Tech bodykit and has covered a reasonable 150k miles. It’s a little too nice to go the racer boys, but with a 5-speed manual and the classic 2.5l inline-6, it has years of fun weekends left in it. It will be very interesting to see where the bidding lands to give us a new baseline for decent, original E30 pricing.