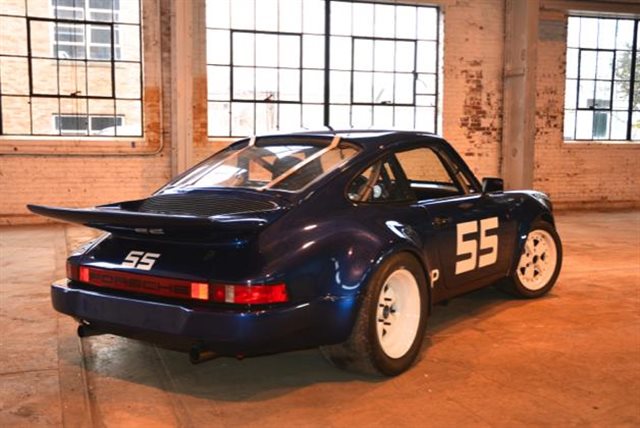 Another day, another crisp SC Targa found down in Florida. This one is a real head turner as it is covered in rather rare Schwarz Metallic paint. The ad says it can appear Slate Grey in certain light, black or even brown at other times. I think I saw  a 911 with this paint a few years back at a meet but didn’t realize it was so special at the time. Also could have been my eyes playing tricks on me, hard tellin no knowin I suppose.

Anyhow, I thought this ’79 Targa deserved some attention as it features not only a unique exterior but a very clean, very pretty Cork interior. This is certainly among my favorite color combinations for a 911, I think it works particularly well on this era. The leather on the dash and on the front seats is new and the Targa top has been reupholstered with OEM material as well. From a visual stand point this vehicle appears to need nothing and the mechanical side of the equation also seems to be balanced. Brand new tie rods and steering rack boots were recently installed, the seller notes that the A/C squeals at bit at start up but from what I’ve read that’s both rather common on these cars. Whether or not it is an easy fix is beyond me but if it was my car, I would keep the A/C off and the top popped to keep cool. For some time, old race cars were near throw-away items. Vintage racing has changed that and given new life to old steeds to the point that some vintage race cars are actually more valuable than their road-worthy counterparts. This is especially true when you’re talking about very rare cars or cars with historic wins – but in some cases, provenance doesn’t matter quite as much when the market is red hot. One red-hot market right now is the early Porsche 911 market with cars tripling in value over the past year and a half. Couple a short wheel base ’65 911 with one of the most historic races linked to the Porsche name – Sebring – and you’ve got one desirable package: For all of the crazy tuner modified cars of the 1980s, there were very few that came out the other side looking better than what the factory produced. However, I think two tuners consistently managed to outperform what came directly from the manufacturer. Alpina is one; the subtle spoilers, large but somehow fitting stripes and perfect wheels always make those models modified by the exclusive tuner really stand out. The second for me is Ruf; it’s simply amazing what just a set of Ruf Speedline wheels can do. It is literally as if the 930 shape was made specifically to match those wheels – not the other way around. You can add in the other Ruf bits, ducts and pieces and really make a masterpiece; but the wheels almost make the car special all by themselves. Of course, if you happen to have a bunch of other period-awesome modifications from top companies, that doesn’t hurt either: The other day, Rob wrote up a 1978 911 SC Restomod which backdated the look to the earlier 911s. It’s a popular trend, not only amongst late 70s and 80s 911s, but even 964s – the basis of choice for cars like the Singer 911. It makes sense; early 911s have gone through the roof and it’s much easier to replicate the look with a later chassis – plus, you get a faster car. Today’s 1977, though, goes a very different route and instead replicated the look of some of the famous 911 RSR race cars. Specifically, this car is made to replicate the early 1970s IROC 911 RSRs – the birth of the “whale tail” legend that continued with racing and street 911s. Looking like a mix of Singer and Rauh Welt Begriff cars, this Olive Green 911S is available on a budget: