Earlier this week I featured a 2004 Unimog U500 that was the ultimate motorsports support vehicle. Today another 2004 U500 is on the auction block that can perhaps be the ultimate utilitarian workhorse. The OM906LA diesel motor inside this truck makes 811 ft/lbs of torque that, like I said earlier, is enough torque to pull a house off its foundation. But this U500 located in Colorado offers much more than just a bunch of torque and 395(!) series tires. Usually when we feature the Unimog on this site, they are of the older variety that are used as absolute outdoor workhorses. Snowblower, construction equipment, military special forces and the list goes on. With six-figure price tags when new, these beasts were often overkill and over-budget for the majorty of the population who need work trucks. But for those who need a massive truck that offers everything and more, this U500 in Texas spec’d out with a massive box and a handful of goodies inside, this Mog should be right up your alley. I love seeing the spectrum of Mogdom, from the pure work trucks, basic restorations, all the way to the all-out earth conquerers. The common thread between most, however, is that they have been redone in some fashion in their lives. Today’s gorgeous, tan 416 looks exactly how it did when it was built in 1974 – and looked exactly this way ever year in between. Having covered just over 9k miles, everything – the undercarriage, the chrome, the wood on the hydraulic tipper-bed – is perfect. It’s amazingly collector quality, yet the price is below some of the workers we’ve seen. I love the Unimog for its massive capability as a work truck – but also its general insanity as a road-legal vehicle. Today’s 1983 U1500 model (square cab, short wheelbase) was restored in 2000 to the state we see today. The Gumby-green is a playful choice, with the side graphics and hilariously large tires conspiring to help this resemble a childhood toy of mine. It’s a bit of a reverse-mullet, all party up front with the color and laughable size, but serious business out back with a bed that doesn’t just dump backwards, but in three directions. Though very clean and well cared for, it’s also ready to rumble – be that in the mud, shipping yards, or apparently an odd automobile-themed birthday party, according to the pictures. The one hangup for all of that business and pleasure is a pricetag way above the usual (albeit older) Unimog’s we see. I dream of owning a Unimog camper, but most of the time the barren, ex-military examples available require a lot of imagination to create one that could actually be lived in. Not so today, as this owner has created one of the most complete Unimog RVs I’ve ever seen, fully ready to climb mountains, ford streams, and escape the zombie apocalypse. If any vehicle could single-handedly circumnavigate the globe, it would be this one. The fast axles make it appropriate for highway use while the insulation means traveling at those speeds won’t destroy your ears. The generator and roof tent show that you mean business, while the living area could serve as an attractive $2k/month studio in San Francisco. It even has an insulated dog house!!! There are quite a few 4×4 Sportvans that serve as mobile apartments in SF – this would be a great choice to do the same and would give you the option to change locales should you become suddenly interested in Patagonia or Mongolia. 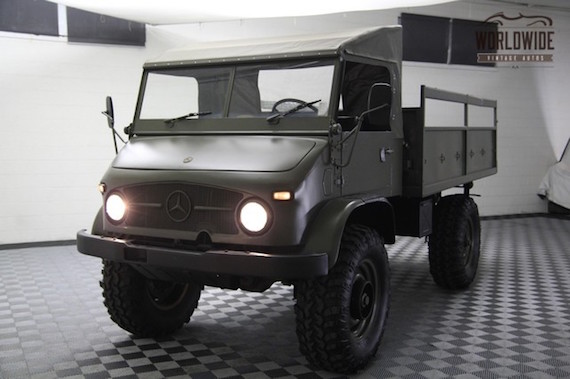 We’ve seen some differing takes on the Unimog recently, including a more modern 90s example and a nice change of color on a white 416. Those were cool, but today’s rings truest to the original inspiration of my Mog love, owned by my childhood best friend’s dad (also owner of an Estoril E36 M3 sedan and a strong collection of Ducatis). When it comes to affordability, even restored versions of the barebones original 404 are way up there when it comes to cool, weird, classic 4x4s. For less money than a brand-new, 2WD, no-option pickup, you could scare every other car off the road. These are certainly a want and not a need, but their impracticality in everyday life (or at least my everyday life) is strongly countered by rather low prices. Most of the Unimogs we write up are from the 60s and 70s due to ease of import and cost. They’re still capable but have interiors like the old Willys Jeep we used to have as an island bruiser. Fond memories of bouncing around and sore elbows indeed! Today’s Mog has come a little ways inside and looks similar to all the other drab-green examples we’ve seen, but a slightly modernized grill hints at much newer running gear. Unfortunately, the cost for this newer 90s model is not just higher monetarily, but also brings the inability to register it for the road in the US. Canadians can rejoice or Americans can plan on having it as a badass farm vehicle, but part of the allure of the Mog for me would be to see the terrified looks on passing motorists’ faces as I towered above them. Alas, the price demands this Unimog be seen as a useful truck as opposed to an awesome toy. This is a refreshingly not-drab green Unimog, a long-wheelbase 416 model looking awesome in white on black with a convertible top. The paint makes it look significantly more modern than a lot of the Mogs we see, even though they were exactly the same for 25 years and look similar still. The aesthetics make me want it, but the auction starting significantly higher than similar models we’ve seen makes me want to stay away. A lot of the Unimogs I write up are interesting fire trucks or post-military vehicles, but the Mog is capable in many more arenas. Some Mogs look tougher than they’ve actually been used, but there is no question that this 406 is a straight up worker. With a front loader and a rear digger, along with several augers to be attached to the front and rear power take-offs, you could take down a forest and dig for gold, then haul it out on the flat bed.